Symbolism of the Ashlars: Borglum's View 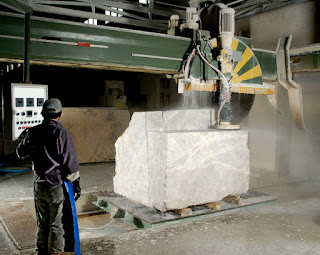 My first attempt at Masonic research was an analysis of the Rough and Perfect Ashlars, two common symbols found in many Iowa Masonic Lodges. My purpose in writing the paper was to describe different interpretations of these Masonic symbols in part to encourage a broader interpretation. In my research, I found references to the three branches of the federal government, social capital, and even comasonry. Rather than focus on a persuasive thesis as to which interpretation is best, I hoped to merely describe unique ways to view these symbols. As a new Freemason, I can't say that I succeeded in that attempt, but I did add to my own understanding.

Many of the ten interpretations I wrote about have been published here on my blog, but I left out the one posted below: Brother Gutzon Borglum's interpretation. My travels this month to Utah inspired me to dig out some of my old photos from previous trips and I discovered several from a visit to Mount Rushmore years ago, and so I was reminded of this great man and what he had to say about the symbolism of the Ashlars:


Over three million people visited Mount Rushmore in 2009, a number greater than the total population of the state of Iowa. (National Park Service) This popular, iconic American landmark is itself memorialized on everything from T-shirts to shot glasses. Gutzon Borglum began work on the massive presidential memorial in 1927. His son, Lincoln Borglum, assumed primary responsibility for the project after his father died in 1941. As many members of the Craft know, both father and son were Freemasons. Gutzon Borglum was Worshipful Master of Howard Lodge No. 35 in New York City. Lincoln Borglum, named after his father’s favorite President Abraham Lincoln, was a member of Battle River Lodge No. 92 of Hermosa, South Dakota.  (Leazer, n.p.)

The Borglum view of the symbolism of the rough and perfect ashlar stems from the artist’s insight into his art. Masonic author Carl Claudy writes about this in Introduction to Freemasonry:

"The famous sculptor and ardent Freemason, Gutzon Borglum, asked how he carved stone into beautiful statues, once said, "It is very simple. I merely knock away with hammer and chisel the stone I do not need and the statue is there - it was there all the time."  In the Great Light we read: "The kingdom of heaven is within you." We are also there taught that man is made in the image of God. As Brother Borglum has so beautifully said, images are made by a process of taking away. The perfection is already within. All that is required is to remove the roughness, the excrescences, "divesting our hearts and consciences of all the vices and superfluities of life" to show forth the perfect man and Mason within."  (Pietre-Stones: Review of Freemasonry)

This view of the rough and perfect ashlars compliments other interpretations. Borglum’s analysis of the human condition highlights our capacity for communion with God, and indeed, focuses on the purpose of our life here: to draw closer to Him. Through the practice and principles of Freemasonry, we build on that qualitative human characteristic and apply the work to ourselves for the improvement of all.
Posted by Mike at 10:09 PM