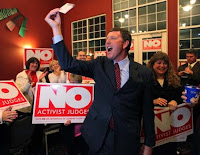 A political post might be appropriate since it's the day after the election.
Quote from Varnum v. Brien (Iowa 2009)
The legislature, in carrying out its constitutional role to make public policy decisions, enacted a law that effectively excludes gay and lesbian people from the institution of civil marriage. The executive branch of government, in carrying out its role to execute the law, enforced this statute through a county official who refused to issue marriage licenses to six same-sex couples. These Iowans, believing that the law is inconsistent with certain constitutional mandates, exercised their constitutional right to petition the courts for redress of their grievance. This court, consistent with its role to interpret the law and resolve disputes, now has the responsibility to determine if the law enacted by the legislative branch and enforced by the executive branch violates the Constitution.
Posted by Mike at 6:18 PM