The Sword in one hand and the Trowel in the other! 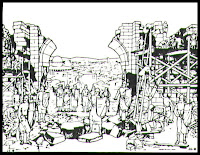 The Glen W. Lamb, 32˚ KCCH and Eugene L. Smith, 32˚ KCCH class’s first weekend is now history. Eighteen class members participated in fifteen degrees, enjoying each one. Our class is a mix of experienced and new masons. Some of us have been raised in just the last several months while others are past Grand Lodge officers. We have a member of the Iowa General Assembly, a high school Government teacher (that’s me), farmers, international business executives, guys in their 20’s, and guys in their 60’s. I’ve made many new friends as a result of this reunion and I look forward to getting to know them better on November 5 and 6 when our class finishes the degrees.

For me, the 7th degree, Provost and Judge, is an early favorite. I enjoyed the lessons on the value of an independent judiciary, combined with the simple costuming and sparse lighting. The message of the 7th degree is especially topical given the Iowa Supreme Court’s judicial retention vote on Nov. 2. Was I the only one thinking this during the degree? I'm not trying to twist the meaning to fit a partisan viewpoint here. It's just that the timeliness and relevance of this degree, and many of the others, surprised me. Maybe it's my background in history and political science, but I think I even heard a reference to factions and Federalist Number 10 in one of the degrees. My Honors Government students would agree with the timeliness of that reference since they have a test over the Federalist Papers on Monday!

I participated as the exemplar in the 15th degree. Okay, I’ll admit it: the sword was really cool and getting to hold it and display it to my class is probably the most memorable part of the degree to me at this point! But as I think about the story the degree tells and after I read more about it in A Bridge to Light, the message of the degree is even more significant. Words like honor, perseverance, and equality were given special meaning by the degree team. They did a wonderful job playing the roles and communicating the lessons of this degree. In fact, all of the degrees were impressive in that way. My class was impressed by the time and effort devoted to this past weekend, on our behalf, so we could experience this aspect of Freemasonry. You guys were great examples for us! Des Moines has an excellent organization and I feel fortunate to become a member.

Here are some of the quotes from A Bridge to Light (which is quoting Pike’s Morals and Dogma) regarding the 15th degree:

-Masonry is engaged in her crusade- against ignorance, intolerance, fanaticism, superstition, uncharitableness, and error.

- The chief obstacles to Masonry’s success are the apathy and faithlessness of her own selfish children…In the roar and crush and hurry of life and business, and the tumult and uproar of politics, the quiet voice of Masonry is unheard and unheeded.

And of course this one, since I held the sword:
- Work on, with the Sword in one hand, and the Trowel in the other.
Posted by Mike at 2:37 PM