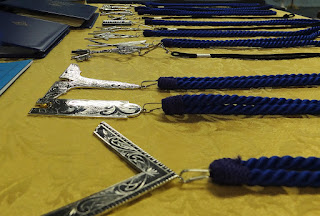 The installation of officers for Star Lodge #115 in Madrid, Iowa occurred on Saturday, January 9. Joseph Clark was installed as Worshipful Master. Operative Lodge #308 and Star Lodge #115 have an especially close relationship which I wrote about in a previous post. Operative Lodge was formed by several brothers from Star Lodge #115. In 1857, Star Lodge held its first meeting in what was then known as the town of Swedes Point, now Madrid. In 1871, brothers from Madrid, with the permission and encouragement of Star Lodge, applied to the Grand Lodge of Iowa for a charter to begin a Lodge in Polk City. In 1872, Operative Lodge #308 received its permanent charter from the Grand Lodge of Iowa.

Congratulations Worshipful Master and the rest of the Star Lodge #115 officers!
Posted by Mike at 11:17 AM