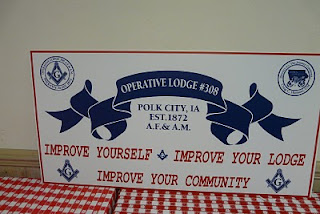 Monday, September 12 Operative Lodge #308 held its Stated Meeting for the month of September. Eighteen brothers were present, including a visitor from Missouri, Bill Cox, a member of Forsyth Lodge in Forsyth MO. Brother Bill is originally from Iowa and was in the area camping at Saylorville Lake. It was interesting to discuss differences in Iowa and Missouri’s ritual with our visiting brother.

Among other Lodge business, Worshipful Brother Darrell G. Fremont, Senior Grand Steward of the Grand Lodge of Iowa, gave a short educational talk on symbolism in the three degrees. The date for the fall pizza sale was set for October 22. Members also approved action to establish a Lodge Facebook group; Brothers Chris Millholin and Scott Nemmers are in charge of this effort.

I uploaded a few pictures from the evening into a Picasa album below.