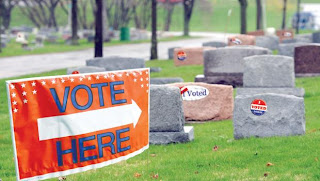 November is election time for more than just political offices such as the president and congress; Masonic Lodges also elect their officers during this month. Officers in a Masonic Lodge are of two general types: elected and appointed. Elected officers include the Worshipful Master, senior warden, and junior warden (secretary and treasurer are also elected). The Worshipful Master is the leader of the Lodge and he appoints two stewards, junior steward and senior steward, as well as two deacons, junior deacon and senior deacon.  Typically, a Freemason progresses through the “line” of officers starting with junior steward and continuing through the deacon positions then the wardens and ending as the Master of the Lodge; each officer’s term lasts one year. For example, if a man starts as junior steward and is reappointed by succeeding Masters and then elected to the positions of the wardens, he will reach the position of Master of the Lodge in seven years.

Elections in Masonic Lodges are quite different than elections for political office. Carl Claudy writes about this in A Master’s Wages. His writing illustrates one of the biggest differences between elections for political office and our elections: the lack of electioneering. Masonic elections are intentionally structured in such a way that electioneering, politics, and lobbying are not just discouraged but inherently ineffective. Claudy writes: “…many lodges do not hold elections for the lower positions, but leave these to be filled by appointment. If succeeding Masters reappoint those already appointed, when they have faithfully served, they eventually get, in line, to whether they must be elected or dropped. Which depends entirely on the man.” I teach American Government to high school students and I can assure you that American elections are not similarly structured!

Congratulations to WM John Whitaker, the Wardens, and the Secretary and Treasurer!