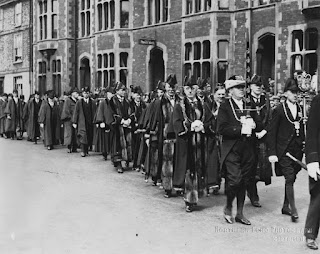 How does one get to meet both the Governor of the State of Iowa and the Right Honourable Lord Mayor of York in the same weekend? Freemasons in Central Iowa know the answer to that question!

This weekend the Iowa York Rite College #37 held its annual assembly in Des Moines at which officers were elected, seven new members welcomed, and the Lord Mayor of York made an appearance as part of the cast in the Order of the Knight of York. I was one of the seven new members of the College and I found the degree to be historically exciting and the lectures to be among the most memorable I’ve heard. The cast of the degree included Grand Governor George Harrison, Deputy Grand Governor David Dryer, members of the Lewis and Clark College #199, and York Rite members from around the state of Iowa. After dinner, Iowa Research Lodge #2 met with more than a dozen Iowa Masons joining as new members. More on this event later.

In addition to Saturday’s festivities, on Friday Iowa Freemasons welcomed Governor of the State of Iowa Terry Branstad as a member of the Des Moines Scottish Rite. Governor Branstad, State Representative Jeff Kaufman, and State Representative Tom Sands joined the Des Moines Consistory in a ceremony attended by United States Senator Charles Grassley, Gary Sissel S.G.I.G., and a large number of Scottish Rite members. The Des Moines Consistory blog as well as  Bailey’s Buddy has more about this event.
(Photo from City of York Public Libraries, http://library.york.gov.uk/uhtbin/cgisirsi/8bQrKeH5JC/YORKIMAGES/194843551/2/8)
Posted by Mike at 7:15 AM