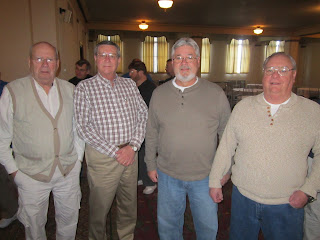 On Saturday, January 28, 2012, the Des Moines Scottish Rite hosted the annual Blue Lodge Breakfast. The Council of Kadosh served a complimentary breakfast of eggs, hash browns, sausage, and cinnamon rolls to over one hundred Freemasons who attended.

After breakfast, Master of Kadosh John W. Clearman introduced a short video program honoring the American Flag. The fifteen-minute video features historical information, patriotic themes, and a hilarious comedy routine by Robin Williams. The video is available free from the Freemason Network, a social networking site sponsored by the Supreme Council, 33°, A.&A.S.R. of Freemasonry, S.J. Click here for a link to the video on the Freemason Network’s YouTube page. This would make for an excellent educational presentation at a stated meeting!

After the program, a cribbage tournament was held. Operative Lodge was well-represented at the tournament, but unfortunately I don’t know the results yet. Check back for an update!